This Website Uses Cookies. Cookies are small text files held on your computer. Cookies will never contain any personally identifiable information. You can delete and block cookies but parts of our site may not work without them. We use cookies in order to deliver the best possible service to you and to provide a secure and effective site service for users. By using this site, you agree that we may store and access cookies on your device. To find out more about how we use cookies and also how you can change your cookie settings, click here.

We need a comprehensive digital education for every school pupil. When digital skills are becoming ever more crucial to all areas of life, from work and learning, to social inclusion, there can be no excuse for leaving anyone behind. With that comprehensive education, we also need to make sure that it is joined-up. Computing education today is in danger of becoming fixated on coding. Students should have the opportunity to learn the basics of computing, including coding in addition to digital literacy skills.

ECDL Foundation’s new position paper, ‘Computing and Digital Literacy: Call for a Holistic Approach’, explores the different approaches to teaching computing and e-skills at school, and calls for a unified approach that equips all school students with all necessary digital skills, as well as reinforces computer science in schools.

“...every child should have an opportunity to be exposed to the fundamentals of computing to the same extent that they learn biology or physics. The aim is not to transform all children into biologists, physicists or ICT professionals, but to provide them with essential concepts of these disciplines”
—‘Computing and Digital Literacy: Call for a Holistic Approach’, ECDL Foundation

Quotes on Computing and Digital Literacy

“Researchers and policy makers urgently need to broaden their thinking about digital skills. There is too little knowledge about the basic digital skills needed to participate fully in everyday life. The current focus on higher level skills such as coding is overshadowing the debate. These skills are of course important for the economy, but since we do not understand what impact the lack of basic digital skills has on a lack of opportunities to participate in the economic, social and cultural life of Britain, we need to go back to basics. More work is needed to think systematically about which digital skills are necessary to achieve tangible beneficial social outcomes and avoid those which are potentially negative.”
—Ellen Helsper, London School of Economics

“We, as politicians, have a moral responsibility to ensure access to digital skills education.”
—Catherine Stihler, MEP

We have also produced a brochure summarising the main topics of the paper. 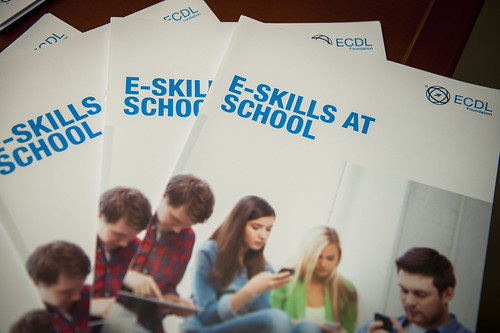 The paper was launched at an event on e-Skills at School in the European Parliament on Wednesday 14 October, hosted by Catherine Stihler MEP.

During the launch event at the European Parliament, hosted by Catherine Stihler MEP, there were contributions from Fiona Fanning, of ECDL Foundation, and Miles Berry, of the UK organisation, Computing at School.

Miles Berry, who has extensive experience of computing education as a former school head-teacher in the UK and a current principal lecturer at Roehampton University, as well as being a member of the management board of Computing in Schools, gave an insight into the way that the computing curriculum in England has evolved.

Fiona Fanning, EU Affairs Manager of ECDL Foundation presented the position paper, highlighting its key message that a holistic approach to computing and digital literacy in schools is essential to preparing students for future study and the workforce.

Catherine Stihler MEP moderated the event, giving her insight to the issue from a policy-maker’s perspective, saying, “We, as politicians, have a moral responsibility to ensure access to digital skills education.” Participants, including MEPs, staff from several departments of the European Commission, and representatives of organisations and institutions including the European Economic and Social Committee, DigitalEurope and CEPIS, engaged in an informative discussion, raising a number of points regarding how e-skills can be taught in schools.

Catherine Stihler was elected in 1999 as the youngest British MEP in the European Parliament, and has proved herself as a strong and committed campaigner, innately pro-European whilst never being afraid to stand up for what's best for Scotland. Catherine is vice chair of the Internal Market and Consumer Protection Committee (2014-) and is a substitute on the Economic and Monetary Affairs Committee (2009-). Having been an active Labour Party member from the age of 18, Catherine is also a member of Community the Union, UNITE, the Co-operative Party, the Fabians, SERA, Labour Movement for Europe and the Christian Socialist Movement.

Fiona Fanning is European Affairs Manager overseeing ECDL Foundation’s European advocacy and communications. When she is not promoting digital skills certification, she is member of the Board of Directors of the European e-Skills Association (EeSA), a community of stakeholders supporting the development of digital literacy and e-skills in Europe; a high level advisor to the European Centre for Women and Technology (ECWT) and an advisory board member to Telecentres Europe.

Miles Berry serves on the management boards for Computing at School and Naace, as well as the UK Forum for Computing Education. He is a principal lecturer at the University of Roehampton in the UK, and a chartered fellow of the British Computer Society. He participated in the drafting groups for computing in the 2014 national curriculum for England and has been involved in many of the implementation projects since then, including the award winning Switched on Computing scheme of work. Prior to joining Roehampton, his teaching career spanned four schools and eighteen years, including three years as a primary head teacher.

Please click here to download a copy of our press release on the launch of the paper.

e-Skills at School in the Media